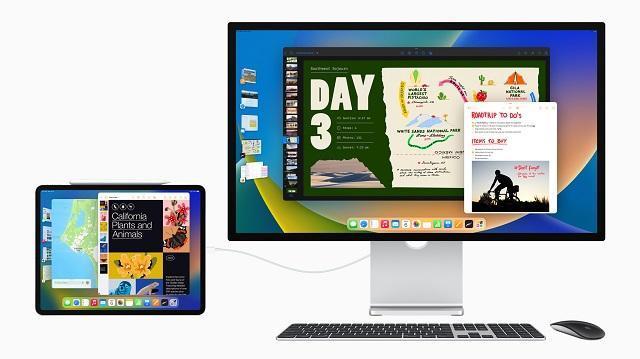 During the WWDC 2022 Keynote, Apple introduced Stage Manager for iPadOS, a new way for individuals to multitask and do activities at once. As is typical of Apple goods, this new feature surpassed our expectations.

That’s right; it’s all mine.

Just so everyone is on the same page, let me clarify. This is hardly the kind of multitasking we were hoping for.

Exactly what we hoped for

A multitasking iPad has been a long-anticipated feature since Apple patent no. 11,320,869 was published online with an accompanying image.

iPad Pro running macOS? As I said in the previous paragraphs of this blog article. This image portrays an actual macOS desktop with the usual macOS-style panels and menus.

According to the patentee, this “macOS mode” might be achieved using an iPad and a Magic Keyboard with Trackpad. It’s all done and dusted! The M1 processor in the iPad Pro allows you to run macOS-style programs!

As I discussed in an introductory essay, the question of what happens to these programs when the keyboard is removed persists. There’s no discussion of the obvious. What piques the interest of those who inquire.

I said that if that were the case, we would be unable to execute existing macOS programs on an iPad. According to Apple, desktop programs with small touch targets won’t work on a device designed for large fingers. What would be the outcome if we removed the keyboard from one of those applications? The amount of effort put forward by this organization is appalling. Alternatively, does a keyboard disappear into the ether, only to be awakened?

You’ll have to admit that these two goods don’t provide the ideal user experiences. Not in line with the Apple-designed appearance of the iPhone and iPad.

No. Adding one and two together yielded a total of sixteen. Catalyst looks like a sensible option if Apple goes with the earlier system. MacOS software will never be available on an iPad… It’s possible to run certain iPad apps on Mac OS X using Catalyst, enabling you to utilize Windows and Mac OS X menu bars.

This year’s WWDC conference started with Apple announcing its new State Manager feature. Our search for a multitasking interface was unsuccessful.

What if we don’t need that?

In Stage Manager, we have access to a variety of resizable panes. We have access to a dock at all times. The “stage” on the left side of your screen allows you to switch between programs while you’re working quickly.

Stage Manager helps us to build various groups of applications for specific assignments or projects. The possibilities are endless, and it’s up to us to experiment with them.

While they may seem familiar to Mac OS X users, they aren’t the familiar windows of the past. Even if the top window is shifted to the side, the bottom window will stay visible. There are no traditional title bars either.

Through Stage Manager, our second display is capable of much more than just mirroring the iPad’s screen.

A lot of us had macOS and Windows in our heads. The menubar in Mac OS X was a given.

Henry Ford was supposed to have created a term when he was alive. According to Ford, if he’d asked people what they wanted before introducing the Model-T, they would have said they wanted faster horses.

I guess that everything will stay the same. We wanted windows that looked like those on Mac OS X since we’re used to it.

A separate question was asked by Apple: “How can we make it easier to operate with a large number of apps?”

Is the desktop version better than the app? It’s much better on a tablet, isn’t it?

We now have this as a result.

You have to understand that I’m still undecided. As I use it, I’d want to keep an eye on how my job develops. I’d want to see whether there’s too much stage clutter and too little application clutter.

Regardless, I’m intrigued. Apple intrigues me because of its constant skepticism and willingness to test the status quo.

Read More: Android vs Ios which is better?

The truth is that we’re searching for macOS-style programs, not windows that look like macOS.

Power from the M1 should be available on iPads.

In addition, we don’t have it at the moment. Apple did not announce new tablet versions of Xcode or Final Cut. Yet.