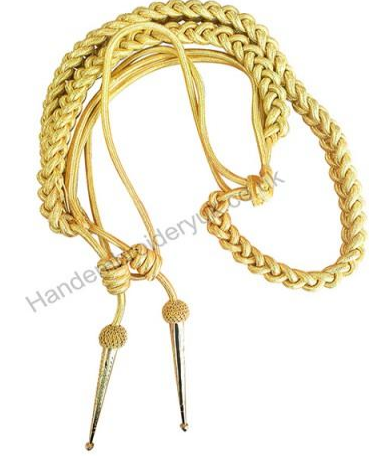 Aiguillette is actually a ornamental silk cord with enhancing metallic tips popular in the 16th and 17th centuries, sometimes of gold set with gemstones or enameled are generally called “aiglets”. “aglets” or “points”. worn on the army uniforms or its also use as the part of other costumes such as academic uniforms, where it will show the honor of the person. “aiguillette” actually originates from lacing used to fasten plate armor together, which used to hung from shoulder.  The current aiguillette or shoelace tip and the ornamental tips on bolo ties are types of aiguillettes.

Aiguillette is an old French word for indicator or tag, and refers to the metal tag at the last of the cords. The aiguillette origin is the same as shoe laces: these both originate in the old-fashioned period for tying clothes, shoes and armour. They are most regularly braided from gold or silver wire and feature pointed with metal tips. Aiguillettes come in different styles, ranging from the gold-wire cord aiguillettes worn by Equerries and Aides de Camp to the Monarch, to simpler corded aiguillettes worn by lower ranks and bandsmen in full dress. With the pristine detailing of the braids, aiguillettes are one of the more desirable features of a uniform.

Buff leather coats were very popular in the 17th Century. With these being up to 5mm thick, buttons were unrealistic, so leather or cord ‘points’ were used to fasten the coat. The sleeves of the coat were also made of buff leather and laced to the top of the arm hole. The ends being knotted off and the tags left to dangle.

It became popular on in-fashion after civil war, bunches of ribbons worn at the tip of shoulder or in the form of long bows with ending points. This trend end in England but in 14th and 15th into the early 18th century it was very popular in French dresses or courts of Louis. British army also revived this style in the form of knot with some changes and they add three loops, as a corporal’s badge of rank of its designation.

In this form it was made of worsted or silk cord of regimental color, with the pointed tags in the same metal as the buttons and coat lace. They were also worn in this fashion by staff officers in metal cord. This style continued for staff officers up to 1814 when the French style was introduced. This had evolved in the French court and army into the style we now recognize but in lighter cord and made in worsted, silk or metal cord. The modern heavy cord style is an elaborate Victorian invention.

Mostly aiguillette wear the armies or official forces officially MARINE CORPS and BRITISH MILITARY wear it. Now more we discuss below in detail:

There are four types of aiguillette worn by the British Armed Forces.

Simple aiguillette worn by lance corporals of the Household Cavalry and by bandsmen of Dragoon Guards and Dragoon regiments in full dress.

In United States Marine Corps are wears Aiguillette it was made with Synthetic Gold & Red. Marine Corps Service Aiguillettes consist of round gold wire and scarlet cord, 1/4 inch in diameter, and consist of two, three, or four loops sewn together all the way around. Service aiguillettes are fastened under the shoulder strap and go around the shoulder just under the armpit, with the longest loop nearest the collar.

Service aiguillettes are generally reserved for the following:

5 Benefits of Incorporating Retinol into Your Skincare Routine

Cats Eye Stone: A Guide to This Mystical Gemstone

How To Care for Your Gold and Silver Jewellery