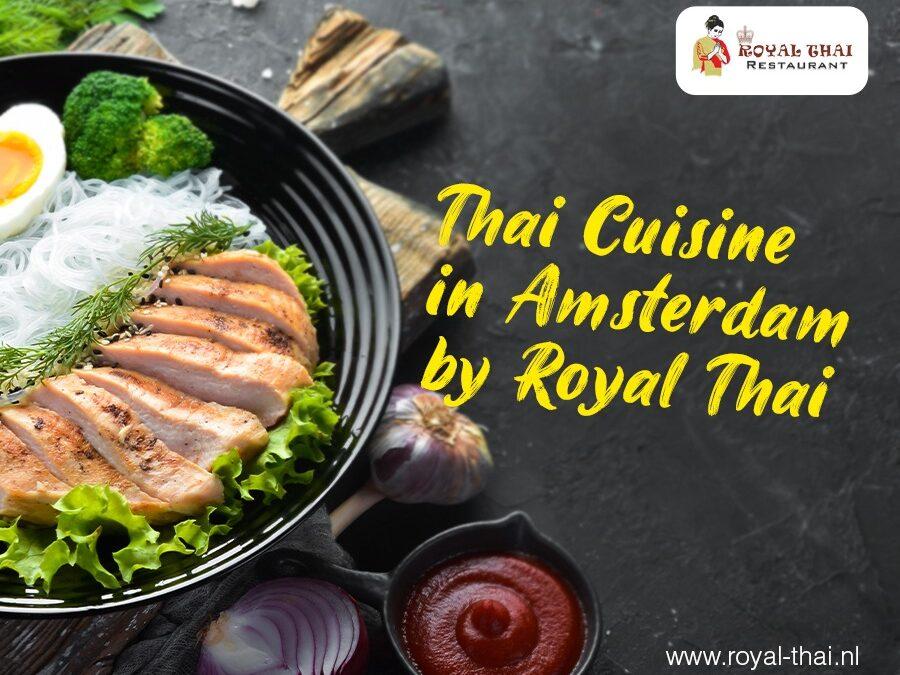 The Royal Thai restaurant brings to you the most flavorful Thai cuisine. It’s known for its hot, spicy flavours that have been an influence of China, India and other neighbouring regions like Laos, Malaysia and Cambodia. Even though influenced by so many regions Thai cuisine has its own taste, texture, colours as well as cooking methods.

At Royal Thai restaurant you can explore a huge range of Thai cuisine in Amsterdam like Thai staple rice, assorted curries, a broad range of seasonings and unique citrus flavours like turmeric, orange, lemongrass etc.

When we speak of this tropical cuisine there are hundreds of Thai dishes one can taste and try. Each dish has its own flavours and features too. If anyone wants to try Thai cuisine in Amsterdam then a visit to the Royal Thai restaurant is a must-visit. Traditionally speaking of Thai cuisine, it takes a long duration to prepare the ingredients to cook it.

This part of Thai cuisine has moderate flavours with an exceptional blend of herbs and sugar. The curries made with coconut milk dishes are highly prominent here. You can also get a taste of this at the Royal Thai restaurant, in Amsterdam.

The dishes that belong to the Northern Thai category are the ones with light flavours. They come with a hint of spices but are not too spicy or salty. Some popular dishes you can check out at Royal Thai restaurant are Sai-ua, Man-Pring Ong and Cap Moo.

When we speak of North-Eastern cuisine it’s majorly influenced by the Laos area. It’s traditionally spicy with a fusion of strong flavours. Some dominating spices are chillies, herbs and spices etc. Mouthwatering, isn’t it? Don’t worry if you are in Amsterdam then visit Royal Thai Restaurant and curb those cravings.

Many popular Thai dishes are just one click away from the presence of Royal Thai in Amsterdam. Thai Cuisine, Amsterdam is easy to find. Go give your taste buds a Thai cuisine party. It’s undoubtedly an international favourite cuisine that can make every mouth drool. Thai cuisine speaks of its culture’s intricate taste, discipline, code of conduct and artistic way of life. It speaks of a detailed connection with the art of cooking and serving food. Hence, Thai cuisine is more than just food, it’s about mindful cooking and conscious eating. Explore the wide range of Thai cuisine and taste everything you just read about at the one and only Royal Thai, Amsterdam.