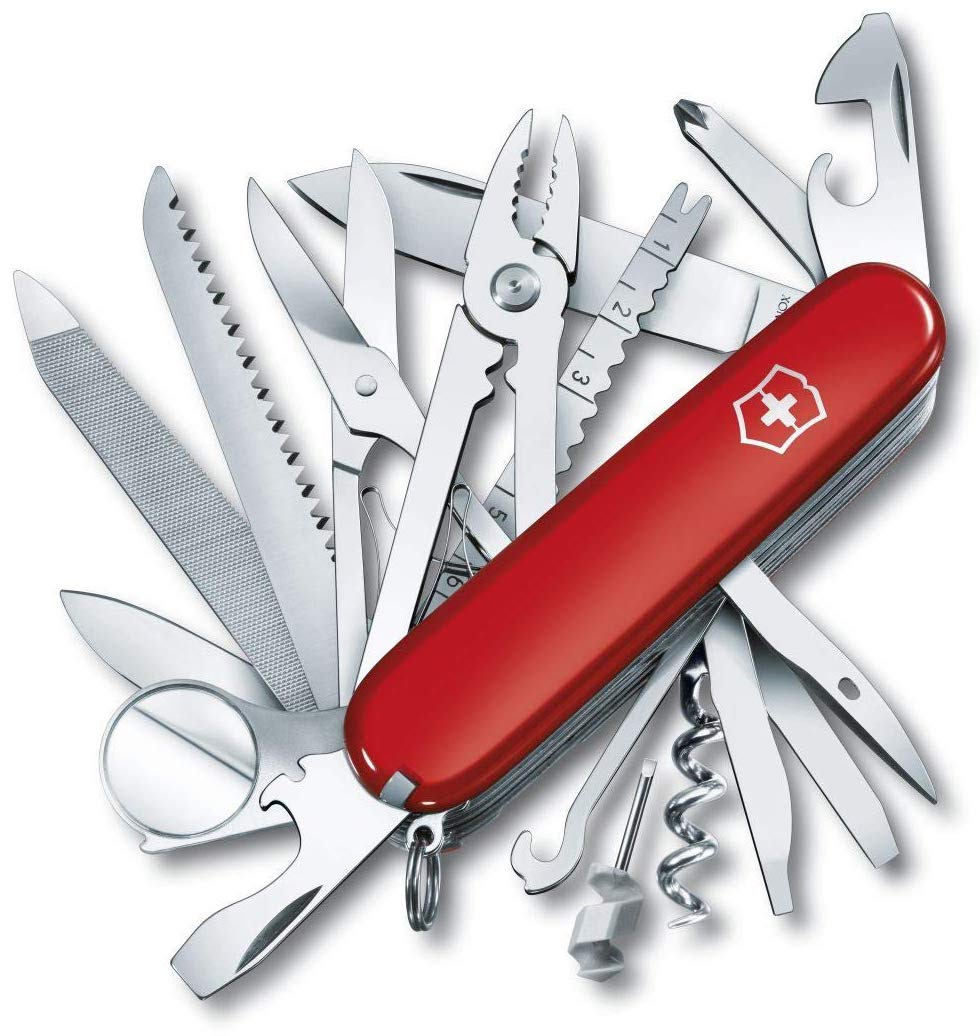 Today we have got Swiss Army Knife Hunter Review, Victorinox Hunter lock blade, it comes in slide out box along with some literature. The knife ships in the box which has a shaped cut out so that it doesn’t roll out. The knife has 11 tools on it. Let’s go through all of them. It has a locking blade, a Corkscrew, a Wood Saw, Cutting Blade, a Cap Lifter/Can Opener, Screwdriver, Wire Stripper, Rimmer, Keying, Tweezers and Tooth pick and it comes with the Victorinox lifetime warranty.

Here are some important tools detail below.

The first one is knife blade, and it opens with a nail neck. Locking blade this is only blade on knife that does lock. The other do have back spring that gives good firm tension, but the official lock blade is knife blade and it has a slider release which you do not see something in other Swiss Army knives. It slides back and forth.

Next up it wood saw, it’s a lengthy one, if you have never used a Victorinox wood saw, I can tell you they work surprisingly well, it looks pretty good but it works even better than it looks, it has a very aggressive ripping pattern. It really works. All the tools folds up to the end, Victorinox are not wasting any space, your are getting the entire possible length on that wood saw. You will be surprise to know that you could cut down saplings with that. You will not have any problem with that, that does a good job. The next blade we have it the Cutting Blade, it’s shaped in such a way for opening up the animals, opening up the hide, prepared for field dressing, it has a blunt of tip. It can also be used as a Rescue Blade, with that long tip that could be used as seat belt cutter.

The next tool is Screwdriver, and that is also a cap lifter, combination cap lifter and a can opener, that would open your can. Next is the Wire Stripper, you make a cut around circumference of wire and pull of the shield. On the other side you will see a Corkscrew, Rimmer and that’s got a very sharp point on it. and a edge on it. so that can be used for drilling, rimming. As you would expect it has the pull out tweezers and next is of course is the Toothpick, that is a plastic Toothpick. If you lose it you could get another one from Victorinox and finally there is a Keyring, you can consider that is tool.

This line of model has a textured surface which is a little bit different from some of the other Swiss Army Knife, the other Swiss Army Knife has flat gloss or mirror-like flat finish, but this one has a slightly textured surface and it’s not the shiny red that you see in some other models of Swiss Army Knives hunter reviews. It’s handy, good sized, it’s shaped well for the hand with good grip, overall it’s a great tool. The Hunter XT offers the essential tool for Hunters and Outdoorsmen.

The shipping weight is 7.2 oz. The price varies based on the different models, promotions, etc, but this Hunter Model costs you $52.20.