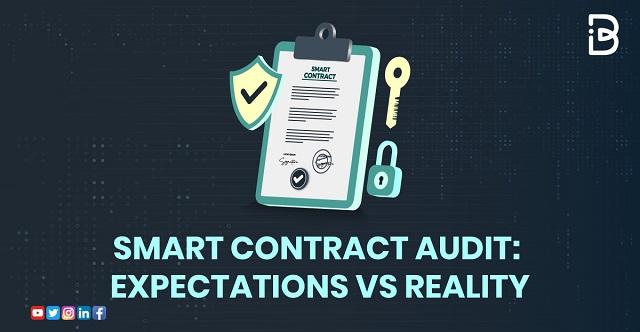 In one of the largest crypto heists to date, Poly network loses more than $600M worth of crypto to hackers. According to the hacker, an attack that was carried out for fun exploited the vulnerability in one of the smart contracts permitting cross-chain transactions.

It wasn’t only the vulnerability taking away the crypto from the project, but ignorance towards cybersecurity. Using Coindesk data to evaluate the major scams of 2021 reveals that many of the largest hack and/or scam projects failed to pass any perceivable audit. Smart contract audits, a necessary pre-requisite before mainnet deployment, was missing in this case.

Undoubtedly, the acceptance of smart contracts is booming, but so is its vulnerability exploitation. Hence, it is imperative to focus on the security aspect of the same.

But is a smart contract audit sufficient for blockchain security? Probably not!

In this article, let’s see what we usually expect from a security audit and how far it is from reality.

Let’s begin with the basics first!

What is Smart Contract Auditing?

A smart contract audit is an in-depth analysis of the project’s code to determine if it follows the intended behaviour.

Auditing is usually outsourced to a third party, providing a second opinion on the code’s functionality and minimizing associated risks.

Secureum defines a smart contract audit as an external security evaluation of a project code that is typically requested by the project team.

Security audits of smart contracts are quite common in the Decentralized Finance (DeFi) space. While most people have begun to recognize the value of audits in the blockchain space, few are willing to delve into the lines of code. However, owing to the immutable nature of the blockchain, it is imperative to put the correct code on the mainnet to avoid further changes.

Must Read: What is a Smart Contract Audit

Why is auditing smart contracts necessary?

Smart contract implementation is a frequent source of concern for blockchain businesses. An attack, once launched, cannot be reversed due to its irreversible nature. Furthermore, you risk losing the entire contract and its assets due to security flaws in smart contracts.

As a result, smart contract auditing has become an important requirement for the following reasons:

Smart contract security audits assist you in identifying potential system vulnerabilities. It allows you to address these flaws before a malicious entity attempts to exploit them and corrupt your platform.

How accurate are smart contract audits: Expectations Vs Reality

As discussed above, smart contracts audit serves more than just a vulnerability tracking process. It optimizes code for gas usage and improves functionality. But, is it all a project needs to ensure security coverage? Let’s find out!

Smart contract audit is not a new phenomenon, and DeFi and other crypto scams are still hovering over the space. Smart contracts have been discovered to be easily exploitable, as evidenced by the numerous hacks and exploits across the ecosystem.

The infamous DAO hack allowed hackers to bleed nearly 15% of the total amount of Ether circulating at the time into some other smart contract.

Because of the perceived issues with smart contracts, a slew of new companies has sprung up providing smart contract auditing services.

One thing to be kept in mind is that a smart contract auditor’s job is to highlight potential vulnerabilities surfacing the smart contract and suggest remediations around them. However, the project developer is responsible for making the required changes per the recommendations. The project owner or developer can choose to avoid them and expose the code for exploitation.

A similar case happens for the Squid game, which, even after undergoing audits, suffered a massive heist of $12M.

Another issue is that there is no set pattern or criteria for auditing a smart contract. Also, the lack of data on the credibility of an auditing service provider leaves users with a plethora of options but questionable trust.

Should the audits bear a portion of the blame, given a large number of successfully audited fraudulent projects?

Probably yes, if an auditor itself is missing out on the error committed by the developer. But, then, a few scams like rug pull do not involve an auditor’s role, as the project developer is responsible for the scam.

Also, even after warning a certain bug with the code, if the project owner chooses to avoid it, the auditor is definitely not the one to be blamed here.

Are there any alternatives?

Here, alternatives can be misleading. Complementing a smart contract code audit with security solutions, including bug bounty, smart contract insurance, frontend security etc., for an assured deployment of projects on the blockchain.

In bug-bounty, a security platform acts as a “middleman” for white-hat hackers to find defects in your blockchain projects and fix any security flaws that businesses may encounter. It gives your smart contract a hacker’s perspective, strengthening it for mainnet deployment.

The ever-increasing use cases of smart contracts, especially after Ethereum’s commencement in the blockchain space, calls for strengthened security.

Since the technology is at its nascent stage, vulnerabilities are bound to be discovered. Still, investing appropriate time and resources for the project’s security can significantly reduce the risk of crypto-heists.

Auditing a smart contract is necessary, although not a sufficient phase of secure code deployment. Hence, complementing it with other layers of protection, as suggested above, can help minimize hacking.