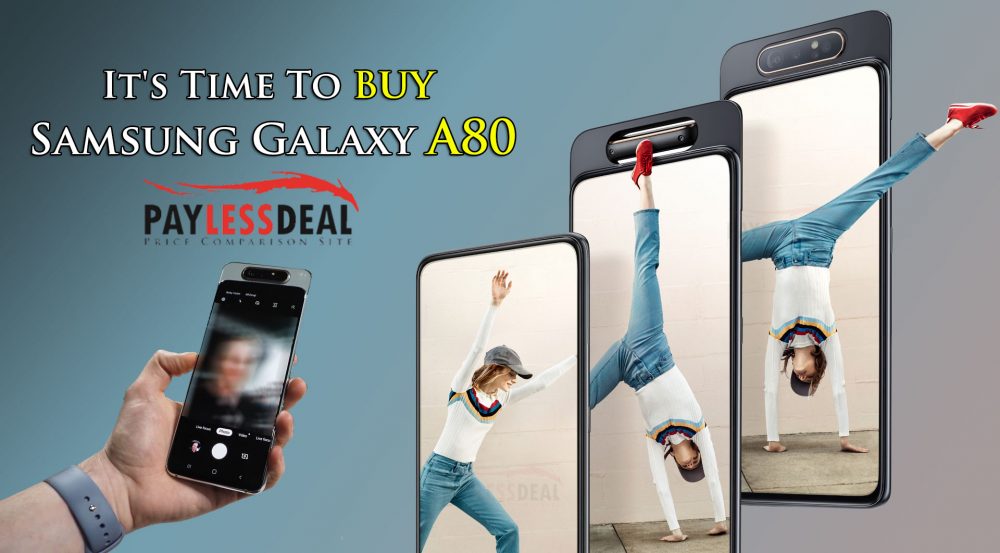 Samsung never stops to amaze its audience. The brand puts all new levels in a world of a smartphone – striking us with the next level of photography abilities with its coolest and greatest Samsung Galaxy A80 in Australia. Perhaps Samsung Galaxy S10 Plus is the attention grabber but it’s not really accessible to an average consumer and here is where Galaxy A80 comes into action. Rather than using a punch-hole or notch to sport a front-facing camera, the rear camera slides up and the camera turns 180 degrees for a selfie or video call. It’s indeed a bold move by Samsung which has the potential to trigger a camera-flipping revolution.

The major highlights of Galaxy A80 are related to Super AMOLED 6.7-inches display, Android Pie 9.0 OS, 8GB of RAM, motorized pop-up rotating triple camera, on-screen fingerprint scanner and 3700mAh battery to keep you online throughout the day. What else does it dish out? Keep reading to find out all about Samsung Galaxy A80 including its release date and price.

The Samsung Galaxy A80 has a high-quality glass design that feels nice while holding in a hand thanks to the metal frames that run around its circle. But at 165.2 x 76.5 x 9.3 mm, it’s large and a little heavy which makes it hard to operate with one hand, and the mechanic behind the pop-up camera makes it a little bit heavy too. This is definitely a smartphone that you will use with both hands most of the time. The power button is holding its position on the right-hand side of the phone whereas volume rockers are placed on the left-hand side and are simple to reach as long as the hand is large enough to wrap around the A80. it comes in three sensational colours – Phantom Black, Ghost White, and Angel Gold.

Well, a major highlight of the design is indeed its pop-up camera which sees a section as large as the smartphone when you move it to the selfie mode through the camera app. The smooth increase and later turning off the three-piece camera block are, undoubtedly, pleasant and the new thing that can be repeatedly raised and lowered down without any kind of damage. This characteristic is likely to wear off after some time, but let us say that every time the cameras pop up and spin around to face you, they raise a smile.

The smartphone is housing an impressive and bright 6.7-inches Full HD+ Super AMOLED “New Infinity Display” with an aspect ratio of 20:9. Thus, it offers users a whole screen real estate without the interruption of bezels around and a notch for unrestricted entertainment while playing 3D games or watching HD movies. The overall design of the smartphone is an amalgamation of metal frame and glass along with smooth and silky curves that give you a more comfortable hold.

Digging down inside the beast, The Qualcomm Snapdragon 730 Chipset with two 2.2GHz clocked cores and with six 1.7GHz power the Samsung Galaxy A80. The Chipset is further partnered with a whopping 8GB of RAM and non-expandable 128GB of onboard memory. The Adreno 618 GPU, on the other hand, is available as well to manage graphical requirements quite well. The smartphone is embedded with Intelligent Performance Enhancer Technology, which tracks how the user uses it and therefore optimizes the chipset accordingly. The smartphone Galaxy A80 can also be supported by Samsung’s exclusive software characteristics like Samsung Pay, Samsung Health, Samsung Knox and Bixby Assistant. As far as software is concerned, it’s running on Android Pie 9.0-based One UI operating system.

The triple rotating Samsung Galaxy A80 camera consists of a 48MP main camera, an 8MP ultra wide-angle lens, and a 3D depth camera. Instead of a traditional selfie camera as smartphones have done that for so many years, the Galaxy A80 comes with the same front and back camera requirements – as we have stated above. Tap a selfie button on a camera app and the A80’s camera slides up, rotates and you will see your lovely face on the screen. Again, tap a button from a camera app to flip the camera back to its rear and it’ll rotate back and will slide down.

Unfortunately, some online sources have not had the opportunity to test how well the 48-megapixel main sensor works alongside the ultra-wide-angle lens and the 3D sensor, which Samsung first launched on the Galaxy S10 5G. The Galaxy A80 features include Super Steady video mode to decrease handshake when capturing and also incorporates scene optimizer and fault detection modes which can be found on Note models and Galaxy S10 Plus.

The Galaxy A80 is backed by 3700mAh non-removable battery with 25W Super-Fast Charging support. There is a Samsung Knox defense system for increased safety with an In-display fingerprint sensor. Moreover, Dolby Atmos technology for high-performance audio production on linked devices like Bluetooth speakers and headphones is included in the Galaxy A80. Talking about Samsung Galaxy A80 connectivity options, it comprises Wi-Fi 802.11 ac, Dual-SIM, Dual 4 G VoLTE, USB Type-C, Bluetooth v5.0, and GPS + GLONASS.

May 29, 2019, was an official release date of Samsung Galaxy A80. However, it’s not yet mentioned that which regions have started getting their hands on as it wouldn’t come everywhere at the same time. Pricing details are to be confirmed too but some sources have claimed that it’ll set users back approx. 649 Euros which is approx. AU$1059 and 735 USD. Paylessdeal.com.au which is one of the leading price comparison sites of Australia will have that beast on board for the audience to compare its rates and buy at unmatched rates with less hassle.