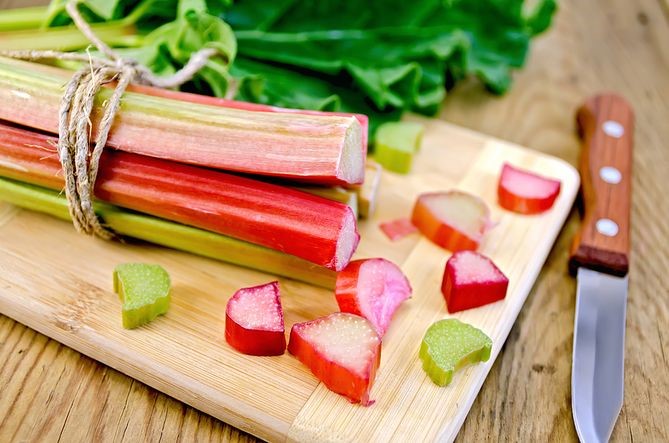 Rhubarb is a plant that we know very well. Her large leaves decomposed in the home gardens of our mothers and grandmothers. Some liked to eat rhubarb stalks raw, with a little sugar. Do we know, however, what are the benefits of consuming this plant?

Rhubarb belongs to the knotweed family. It is also called smithing. It has characteristic large leaves and long, quite thick leaf petioles. The most popular species of this plant are: rhubarb, garden, curly and palm rhubarb. In Many countries, rhubarb is considered a vegetable, in the US it is a fruit.

Rhubarb, which we know, like and remember from childhood, is a garden rhubarb. Rhubarb is used in medicine. It is slightly different from the traditional one. It is primarily larger – it can even reach 3 meters. The medicinal properties of rhubarb are valued primarily in China.

Rhubarb is a perennial that has many valuable nutrients. It is a source of vitamins C, E and A. By eating this plant, we absorb quite large amounts of phosphorus and potassium. Rhubarb has anti-inflammatory effects. In addition, rhubarb has laxative properties. Rhubarb is a source of fiber, thanks to which it regulates digestion. The properties contained in rhubarb also help it with flatulence problems.

Rhubarb has estrogenic properties – this is especially important for women with acne complexion, menopause and men struggling with prostate hyperplasia. Such rhubarb properties are associated with the presence of raponticin.

In addition, after baking, polyphenol – rapontygenin is produced in this plant. This component prevents the development of cancer cells. In addition, rhubarb has antioxidant and antiallergic properties. It has a beneficial effect on the functioning of the circulatory system.

Rhubarb can be consumed by people who care about losing unnecessary kilograms. After eating about 10 dag rhubarb tails, we only absorb 20 kcal. It’s really not much.

3. The use of rhubarb in the kitchen

Rhubarb can be consumed in many ways. This plant has one edible part and it is its petiole. We cut it at the root, then we should get rid of the leaves. With such tails, we can already prepare such rhubarb dishes as we wish.

Rhubarb recipes are very popular. Rhubarb tastes good both raw and after grilling or cooking. Remember, however, that raw rhubarb stalks are sour, so it’s best to choose those that are pink or red. It is a good idea to sprinkle them with sugar, and in the healthier version – e.g. stevia or pouring honey on them. Of course, it’s good to peel them beforehand.

What other rhubarb recipes are worth trying? Of course, a delicious rhubarb cake. The bottom of the rhubarb cake can be crispy biscuit. You can also use it to prepare yeast dough with rhubarb – you can prepare a traditional cake or rolls with it. If we like to eat dessert with fruit from time to time, let’s take advantage of seasonal “goodness”. Rhubarb cake recipe is a very good idea for Sunday afternoon tea.

Recently, rhubarb tart recipes have become increasingly popular. The bottom of the rhubarb tart can be made from any type of flour. The healthiest of course will be the whole-grain bottom of grated rhubarb. The rhubarb tart filling can be over-cooked or mixed to form a rhubarb mousse. Stuffing tart with rhubarb will go great with e.g. pudding. There are really many possibilities.

Rhubarb can also be used to prepare syrup, jam and even wine. Remember, however, that the plant has the best flavor until the end of June. Later rhubarb dishes may have a bitter aftertaste.

If you don’t feel like rhubarb cake, you can store it in the fridge for quite a long time and even freeze it. This rhubarb is very well suited for storage in a freezer.

We already know that rhubarb is a source of valuable nutrients. Unfortunately, some of its components can cause considerable damage to the body. Therefore, not everyone can take advantage of the rhubarb recipes.

However, remember not to consume this plant too often. Rhubarb is a source of oxalic acid. This relationship has a very bad effect on our health. Due to rhubarb, kidney stones may develop and leach calcium from the bones. Note, these substances can also be found in sorrel, spinach and figs.

Men with a problem with low testosterone levels should be particularly careful with rhubarb. Consuming rhubarb can contribute to a further reduction in the amount of this hormone in the body.

Women who are breastfeeding should be cautious. Along with their milk, the child accepts the ingredients contained in this plant that have a laxative effect. To avoid diarrhea in your baby, it’s better to refrain from eating, for example, the rhubarb cake you like.