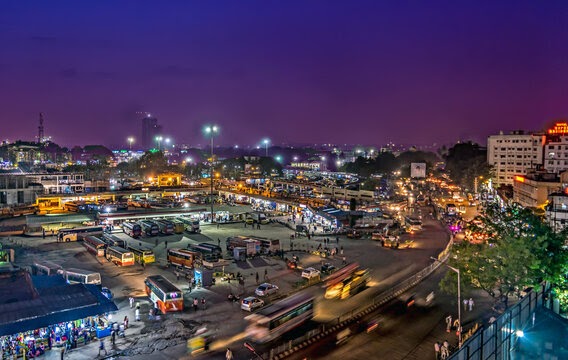 Lalbagh Botanical Garden is a nationally and globally recognised centre for botanical artwork, scientific research of plants, and plant conservation. It is located in Bangalore. Lal Bagh, a sanctuary for nature enthusiasts, is a 240-acre park in the centre of the city with approximately 1,854 plant varieties. Hyder Ali commissioned it in 1760, and his son Tipu Sultan finished it. The area, which has been designated as a Government Botanical Garden, has uncommon species from France, Iran, and Afghanistan. The Lal Bagh Rock, which is over 3000 million years old and a popular tourist attraction, may be located here.

This botanical park, which is a photographer’s dream, also includes the famed glass house, which hosts an annual flower exhibit every year, as well as an aquarium and a lake. Tipu Sultan imported trees and plants from all over the globe and planted them at Lalbagh Botanical Garden, which now boasts one of the world’s largest collections of rare species. This garden is home to a variety of birds, including Myna, parakeets, Crows, Brahminy Kite, Pond Heron, Common Egret, and Purple Moor Hen, in addition to being lush with greenery.

The Bannerghatta National Park, 22 kilometres from Bangalore, is a haven for a wide range  of flora and animals. This national park, which covers an area of approximately 104.27 square kilometres, was established in 1971. The park itself is home to a multitude of attractions, including the country’s first butterfly park.

There are also eleven Reserve Forests of the Bangalore Forest Division’s Anekal Range, an aquarium, a zoo, a children’s park, a crocodile farm, a snake park, and a park dedicated to prehistoric animals. Furthermore, a jungle safari, which is a popular activity here, allows you to get up up and personal with the incredible animals.

The Majestic Bangalore Palace is an example of outstanding grandeur and beauty that retains the flavour of ancient imperial splendour. The palace, which is now the city’s main attraction, was constructed in 1878. The original land was purchased in 1873 from Rev. J Garret, the head of Bangalore Central High School, with monies provided by Chamarajendra Wadiyar’s British Guardians. The palace is enormous, with 45,000 square feet of floor space. The majestic palace that we see now is the product of a combination of Tudor and Scottish Gothic design. The palace’s wooden construction, as well as the exquisite carvings inside and exterior, exhibit the royal culture in a variety of ways.

Cubbon Park in Bangalore, which spans 300 acres, is a popular tourist destination known for its lush greenery. It is located in the city’s green belt and is excellent for nature enthusiasts and those seeking a peaceful environment. Lord Cubbon established the foundation for the park, and it is named for him. It is home to around 6,000 trees, which help to sustain a healthy environment. Some of the city’s significant structures, including as the Attara Kacheri, Cubbon Park Museum, and Sheshadri Iyer Memorial Park, are also located here, in addition to being a natural tourism attraction. The Bangalore Aquarium, the second biggest aquarium in India, is another popular attraction in Cubbon Park.

Commercial Street, which is located in Bangalore’s Central Business District, is home to a lot of small shops and brand outlets that sell a wide range of items. Commercial Street is one of the first retail places that a visitor to the city is taught about, and it is a one-stop shop for all of your shopping requirements as well as weekend entertainment. It goes without saying that it is one among Bangalore’s most popular and visited shopping locations. Commercial Street is a shopaholic’s dream because of its vibrant environment, which is always buzzing with activity, and the wild, mad rush of the local market.

The Innovative Film City is separated into three sections and is large enough for you to wander about and enjoy all the city has to offer for at least half a day. Enter the Innovative Attractions to experience amusement park rides and museums, as well as a plethora of areas such as Wild West Wind and Cartoon City; and the Innovative Studio to see the world of movies and elegance. In the meanwhile, stop by the Innovative Style to do some shopping and eat cuisines from all around the world. The Innovative Film City, a high-quality mash-up of many topics, appeals to both children and adults. So make sure you take your family or friends to this attraction.

The beautiful lodging of Tipu Sultan, the brave monarch of Mysore, is located at the intersection of Albert Victor Road and Krishna Rajendra. The palace is located in the Bangalore Fort in ancient Bangalore, Karnataka, in the south-western Indian state of Karnataka. The magnificent palace, which was formerly utilised as the king’s summer retreat and was known as the ‘Abode of Happiness’ and ‘Rash e Jannat,’ meaning ‘Envy of Heaven,’ is an excellent example of Indo-Islamic architecture. The palace has decorative paintings, majestic arches, projecting balconies, and dazzling themes, making it one of the most notable ancient constructions. Acropolis is a great place to go for a leisurely stroll.

Lumbini Gardens, named after Lumbini of Nepal, is a public park on the banks of Nagawara Lake in Bangalore, Karnataka. It’s in honour of Lord Budhha. Despite the fact that the garden is primarily a national park, it is a visual delight with its peaceful vistas and abundant vegetation.

The Lumbini Garden, located near the Nagwara Lake, is a one-of-a-kind garden attraction in Banglore. Every day of the week, the garden attracts a large number of people. The lake’s lovely, tranquil atmosphere welcomes tourists with enthralling views and activities to enjoy with their loved ones. Lumbini Gardens is a lovely children’s park with a boating club that tourists appreciate immensely.

The ISKCON Temple is recognised for its engagement activities with Lord Krishna’s passionate devotees. The temple enrols members for life and organises Krishna consciousness and Lord awareness activities in its community centres. In public processions, the temple community often organises songs and performances honouring and praying to Krishna. Lectures and prayer sessions are held on a regular basis. Furthermore, the ISKCON temple community engages in a range of activities aimed at finding spirituality on an individual level as well as fostering community peace.

Wonderla is regarded to be the greatest amusement park in the city (and one of the best in the country), attracting thrill seekers from all around. While it is most known for its high-speed dry rides, it also has some more relaxing, enjoyable rides, so there is something for everyone.

Wonderla is a large amusement and water park located on the outskirts of Bangalore on the Mysore road, with over 60 rides. It is well-known for its assortment of “high-thrill rides,” which is one of the park’s primary attractions. It also has India’s first “reverse looping roller coaster,” which allows you to ride in both ways, once straight and once in reverse.