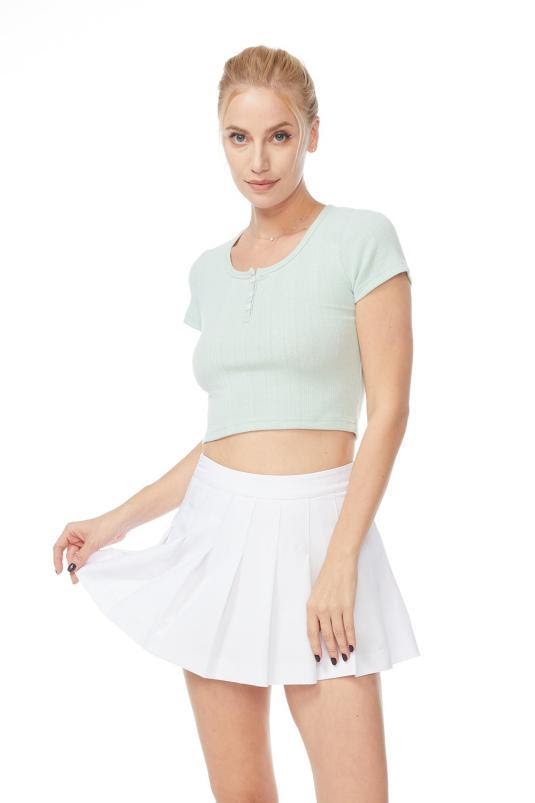 Tennis skorts and skirts are a staple of any tennis player’s wardrobe. There’s no longer any need to be perplexed. Yes, there is a garment called a skort, which is a combination or rather a portmanteau word made up of the phrases short and skirt. PollyPark.com will help you find the most suitable tennis skirts for exercise. What is the difference between a tennis skort and a tennis skirt?

There are two sorts of skorts available on the market. The first type has a fabric layer covering the front and short area, and from the back, it appears to be a typical pair of shorts. Not only on tennis skorts, but also on swimsuit bottoms and in some conventional apparel stores, this style is popular.

Another skort style looks like a skirt from both the front and back. It consists of a pair of shorts surrounded by a layer of cloth or a skirt. This look is popular not only for tennis, but also for school, swimsuits, and cheerleader uniforms.

In the skorts, the skirt fabric serves no purpose; instead, the short below serves a purpose. It eliminates the possibility of accidentally revealing your underwear while playing your game.

Women appreciate the freedom and ease that skorts provide, as well as the fact that they display less of their physique than shorts. Furthermore, skorts successfully disguise any visible flaws and are dressier than shorts.

While women have been playing tennis for almost 150 years, it wasn’t until the 1920s that the idea of wearing a short skirt became fashionable. Women had to play tennis in floor-length skirts, long-sleeved tops, and hats before that. It wasn’t until after WWII that their skirt hemlines began to shorten. Tennis players wore miniskirts for the first time in the 1960s.

Tennis skirts have become so short since then that manufacturers began producing skirts with built-in panties or shorts in the twentieth century, removing the need for the player to wear any additional, special undergarments.

Differences between tennis skirts and skorts

It’s critical that you understand and appreciate the differences between tennis skorts and skirts so that you know what you want and whether you prefer to play in skorts or skirts.

The most significant distinction between a skirt and a skort is that skorts have separated legs. This provides them more freedom and ability to participate in the game. It has the appearance of a short skirt, but it has independent leg parts with a front flap. Skorts are usually short, yet they provide more coverage than a pair of shorts.

Skirts are one-piece clothing that reach from the waist downwards without a junction between the legs. In other words, unlike skorts, skirts do not include a pair of shorts. This is why, in order to be comfortable while playing, ladies who wear skirts usually need to wear an extra pair of shorts.

Buying and wearing skorts, on the other hand, eliminates the need for additional clothes, making it a more comfortable and superior alternative for most women.

Tips for choosing the right skorts or skirts

Tennis skirts are considerably more fashionable and functional than skorts these days, and they must be picked with certain aspects in mind. Tennis skorts are created from a variety of fabrics and are tailored to the wearer’s preferences in terms of cut, waistline, and length.

Furthermore, there are many ladies who are interested in purchasing tennis skorts because they can be used for other activities such as running, hiking, and kayaking.

With such a large market for tennis skorts, it’s understandable that producers would create skorts in a large variety of styles and materials, making it difficult for some ladies to choose.

Tennis skirts are commonly available in A-line, straight, and pleated cuts, so the skort cut is the first thing to consider. Each design has distinct qualities that are worth learning about. A-line skirts are popular because they don’t cling to the legs and so flatter most forms.

Straight-cut skirts, while clinging to the legs, provide more freedom of movement than A-line skirts due to the slits made into them. Pleated skirts are the most basic and classic tennis skirt design, with kick pleats resulting in pleated skirts having the most fabric.

Since the beginning of the fabrication of tennis skirts, the fabrics used to make them have changed dramatically. Today’s skirts are constructed of high-performance polyester fabrics that keep athletes cool, dry, and comfortable at all times.

Tennis skirts are also selected depending on the design of the waistband, which can be elastic or banded. Skirts with elastic bands are easier and more pleasant to wear because elastic waists are often stretchy in function.

While the banded style is stiffer to wear, it does provide a more secure feeling when worn. Elastic and banded skirt waistbands available in a variety of widths. While many people believe the flat and broad variants to be more comfortable and stylish to wear, full-figured ladies do not feel as at ease in them.

Tennis skorts are also available with other sorts of less form-fitting shorts, as well as shorts featuring ball pockets for holding tennis balls. Of course, because compression shorts do not move about much and do not ride up like other shorts, even skorts with compression shorts can simply and firmly tuck a ball beneath their fabric.

Because tennis skorts are made up of so many various types of shorts with distinct qualities, it’s critical to study the skorts’ description before purchasing. Make sure to pair your skorts with your favorite and most comfy pair of shorts when you go shopping.

Another consideration while purchasing tennis skirts is the length of the skirt. Tennis skorts are available in a variety of styles and lengths from most tennis skort manufacturers. For most styles, the skirt length is between 11 and 15 inches measured from the waist to the bottom on the center backside.

It’s a well-known fact that white is a popular tennis color. Because it efficiently masks sweat signs, it has been used since the dawn of modern tennis. In fact, white is still the traditional tennis court color, which is why Wimbledon still has a dress code requiring players to wear tennis whites.

It is, nevertheless, difficult to maintain whites pristine, particularly cotton whites. This is why athletes who wear immaculate whites are regarded as affluent. Colored clothing is, in reality, more than legal and tolerated on the court, with the exception of Wimbledon and a few other private tennis clubs.

While Wimbledon players are still required to wear white, they can wear beautiful and fashionable tennis skirts designed and made by top designers. As a result, tennis skirts are now available in a variety of hues. There are numerous varieties and designs to pick from due to the various fabric possibilities and colors utilized in the making of tennis skorts. 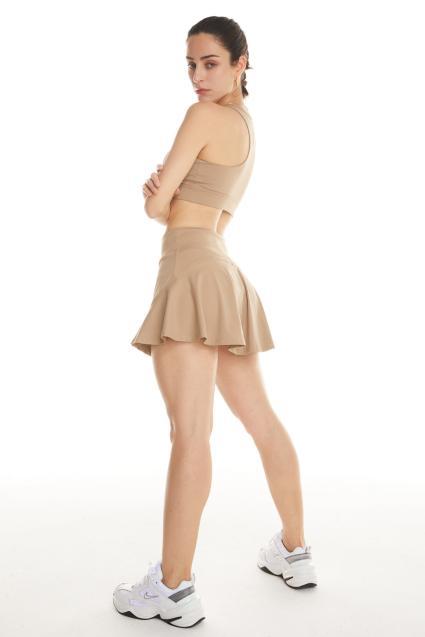 It goes without saying that size matters when shopping for tennis skirts; no one wants to buy skirts that are too big or too little to wear! Tennis skirts come in a variety of sizes, just like any other sort of clothing.

This is why you must first measure your waist and hips in order to select the appropriate pair of tennis skorts from a particular brand. To take measurements, get a measuring tape, or if you don’t have one, a long piece of rope and a ruler will suffice.

Even the terminology for tennis skirts or skorts varies between companies, which is interesting to understand. While Fila and Adidas refer to skorts as skirts with built-in shorts, other manufacturers, such as Nike, sell both skirts and skorts. So, while shopping for and researching tennis skirts, be prepared and grasp the definitions of both terms.

Before you purchase your skirt, like with anything else, you must conduct the essential study.

This is true if it’s your first time buying and wearing a tennis skirt. To sparkle a better idea, have a look at some images and videos of your favorite tennis players and other sports wearing and performing in them.

You can then get a better idea of how the various styles and colors of tennis skirts appear in action.

It’s fascinating to find that, among the many sports that women participate in today, tennis is the only one with a long and illustrious history of fashion. The skirts that women wore while playing tennis centuries ago were significantly more restricting in function. Tennis skirts, on the other hand, have changed and evolved with time and fashion. Tennis skirts come in so many different styles and designs these days that it’s easy to look attractive while wearing effective sporting attire. It’s up to you to pick your tennis skirts or skorts based on your preferred color, budget, and, of course, personal preference.