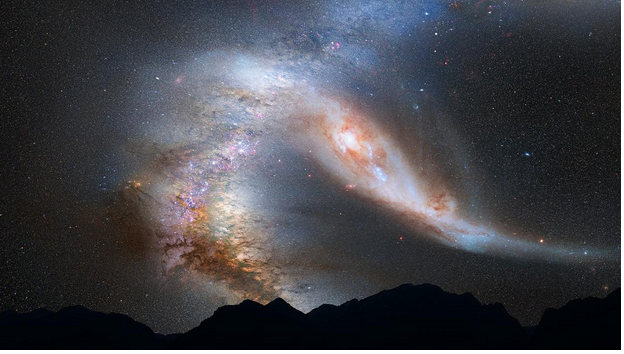 The Milky Way Galaxy is the giant place in the universe; it measures about 120000–180000 light-years of diameter. Milky Way is the sweet home to our planet Earth; in fact, it’s the birthplace of humanity.

Our planet’s solar system resides about 27000 light-years away from the center. There is much to explore as the Milky Way has enormous tidbits information; in this article, we are covering some of the exciting facts of the Milky Way.

The Milky Way is warped/twisted in shape, the reality which astronomers connect to our galaxy’s two neighbors are the Small and Large Magellanic Clouds.

The two dwarf neighbor’s galaxies which are the member of our local groups might be orbiting our Milky Way galaxy. It is also supposing; it’s been pulling on the dark matter in Milky Way similarly like in the game of galactic tug of war.

This pulling creates a kind of oscillating and swinging frequency which pulls on our galaxy’s hydrogen gas.

Milky Way has an enormous halo

All scientists and astronomers believe that about 90% of Milky Way’s mass contains dark matter which creates a mysterious halo.

It means that the rest of the luminous body that can be seen through the naked eye in the night or telescope is less than 10% of all Milky Way galaxies.

We know the more massive the galaxy, the faster it should orbit. If someone is assuming that our galaxy is made of only luminous matter which we can see, then the oscillation would be much less than what we are observing.

So, it proved that the rest of the galaxy mass must be made of out of reach invisible mass which is dark matter, or the dark body which only interacts gravitationally with the ordinary matter of our galaxy.

The Milky Way has more than 200 billion stars

Our universe has billions of galaxies, the giant galaxy we know so far is IC 1101 which has more than 100 trillion stars and there are trillion other galaxies which are larger than IC1101.

The Milky Way is the middleweight galaxy compares other gigantic galaxies.

The dwarf aforementioned Large Magellanic Cloud has up to 10 billion stars while the Milky Way has 100 to 400 billion stars, but when we look up in the night, we can see the only one point on the globe.

It may be astonishing for you, but the Milky Way is full of Gas and dust. This matter creates up a massive 10-15% of the luminescent matter in the galaxy. Our Milky Way is up to 100000 light-years, and we only can observe 6000 light-years in the visible spectrum.

Great Tips for Opening up a Coffee Shop