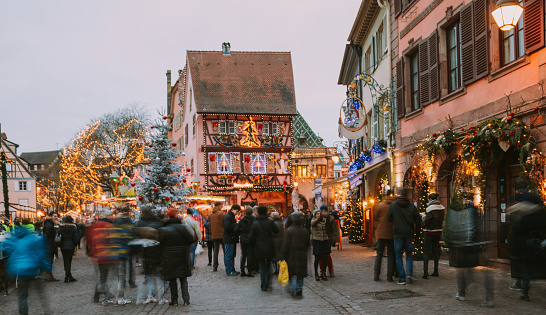 Christmas, one of the most anticipated occasions of the year, is rapidly approaching, and now is an excellent opportunity to buy your cheap flight tickets to one of the most amazing Christmas markets. Twinkling fairy lights, the warm aromas of gingerbread, yuletide hymns performed by a choir, and people costumed as Eskimos – nothing beats an actual Christmas market to get you in the holiday spirit.

Christmas markets provide joy to the darkest time of year. The majority are patterned after historic German marketplaces known as Christkindlmarkts (the spelling sometimes varies). The markets, which are held all around the world, celebrate the holidays with beautiful lights and music and attract customers to explore decorations, sweets and cookies, handmade toys, and other items.

Today, Christmas markets modelled after these ancient European celebrations may be seen all over the world, from America to Asia. As the Super-trees come to life with light shows set to Christmas songs, Singapore’s famed Gardens by The Bay is converted into an extravagant Christmas market replete with a carousel, ice skating rink, and foam snowfall. The Stanley Plaza Christmas Market in Hong Kong attracts approximately 300,000 tourists each year. The plaza, which will be decorated to seem like a Finnish market, will have over 100 vendors, as well as a life-size traditional Finnish Yule goat and a seven-metre-tall Home of The Elves. There is so much to see and do, and it’s a great time to purchase cheap airline tickets from London for Brits who want to spend their Christmas visiting the blooming spectacular Christmas markets.

The Vienna Christmas World, located on Rathausplatz beside the Rathaus, Vienna’s ancient city hall, is one of the most recognisable Christmas markets in the world. The huge arched doorway flanking the entry welcomes over 3 million visitors each year, who walk through the 150 market stalls selling traditional Austrian delicacies, Christmas ornaments, handicrafts, and drinks. Listen to choirs and trumpeters perform on the Christkindl stage just beneath the giant Christmas tree, and skate around a 3,000-square-metre ice rink and along several trails around the park while admiring the spectacular light works based on Christmas stories for children.

Prague comes alive at Christmas, with festive markets springing up all around the Czech capital. The largest and most beautiful of them may be seen in Old Town Square, which is snuggled around the Jan Hus statue and surrounded by centuries-old Gothic, Renaissance, and Baroque buildings. Consume Czech specialities such as grilled pig, blood sausages, Czech muffins, and conkers, and mead. The festive programme includes performances of traditional dance and music, as well as an impressive Nativity scene with real animals. If the enormous Christmas market isn’t enough to keep you entertained for the evening, Wenceslas Square Christmas Market is just a short walk away.

Basel, a Swiss city on the Rhine’s right bank, features three significant Christmas markets: the largest is on Barfüsserplatz in the old town, with a new market near to the cathedral on Münsterplatz and a smaller one on Claraplatz on the right bank of the Rhine. The three are connected by brilliantly decorated streets, retail displays, and apartments, and are easily accessible on foot. Little wooden chalets dot the lanes, offering crafts, regional products, and culinary specialities like oozy Swiss raclette and flammkuchen, a thin Austrian pizza.

Strasbourg’s deputy mayor dubbed the French city the Capital of Christmas in 1992, and there are roughly a dozen Christmas markets in various locations across the city. Since 1570, when Strasbourg was part of the Holy Roman Empire of the German Nation, the most famous one has been hosted at the foot of Strasbourg Cathedral, making it one of Europe’s oldest Christmas markets. A 100-foot-tall Nordic tree stands in the centre of a Christmas hamlet adorned with kilometres of twinkling lights. There are over 300 vendors selling anything from pastries and glühwein to homemade gifts and holiday decorations.

With 4 million people each year, this is Germany’s most popular Christmas market. The fair, which takes place at the foot of the great Cologne Cathedral and beneath the Rhineland’s largest Christmas tree, features roughly 150 stalls modelled after small Budens. Handicrafts, presents, food, and drink are all available in these red-roofed cottages. More than 100 free Christmas programmes and performances are centred around a large stage. The exciting programme at the Sternenwarte booth, as well as the ever-popular carousel, will captivate children.

Moreover, if you require to acquire more about booking cheap airline tickets from London to one of the most stunning Christmas markets or current travel trends, visit Reliance Travels, the most trustworthy source of travel information.