Know About Sinus Causes, Symptoms, and its Treatment 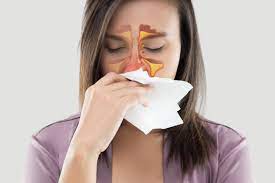 Sinus treatment in Ayurveda has positive and long-lasting effective results. But the important factor is that one should consult ayurvedic experts at the right time.

1. Acute Sinusitis: Acute Sinusitis occurs for the shortest duration that lasts for 2 weeks. The symptoms of acute sinusitis include common cold, runny nose, and seasonal allergies.

2. Subacute Sinusitis: Subacute sinusitis lasts for 3 months and it generally occurs due to seasonal changes or seasonal allergies.

4. Infected Sinusitis: As the name itself define it, infected sinusitis is caused by a virus or infection. Some people get infected with sinusitis several times within a year.

Ayurveda has an effective sinusitis treatment. Ayurvedic experts use different herbs or therapies to cure sinusitis based on the requirement.

Several reasons are responsible for sinusitis like allergies, infection, bacteria, germs, pollutants, and fungi. In general, sinuses are filled with water but when sinuses become blocked with fluid, germs, bacteria, and fungi cause sinusitis.

Other Causes of Sinusitis Include

Consumption of heavy foods that is difficult to digest.

Sinus treatment in Ayurveda uses therapies, yoga, meditations, and natural Ayurveda herbs. Ayurveda originate in India over 3,000 years ago and it not only treats the physical tissues of the body but also connects you with your inner soul that no other treatments can do. Nasya treatment is very beneficial for sinus treatment.

When it comes to sinus treatment in Ayurveda, Nasya is one of the five ayurvedic detoxification therapies that are recommended by ayurvedic experts. Nasya therapy requires ayurvedic herbs, medicated oils, and herbal powder which is administrated through the nostrils to stimulate the secretion of mucus. It is very effective to clear the blockages.

Steam inhalation reduces the congestion in the sinuses passage. Add medicated herbs or oil as per the ayurvedic expert’s advice in the boiling water and take the steam. Inhale the steam for 10-15 minutes and repeat the process 3-4 times a day. It removes the blockage and helps in curing sinusitis.

Dhumapana with Haridra Churnam clears the nasal passage and reduces the pain and thus helping in treating sinusitis.

As we know, ayurvedic experts believe in ayurvedic herbs for treatment. Some of the herbs that are advised or prescribed by ayurvedic experts to cure sinusitis are Haridra Khanda, Chitraka Haritaki, Dasamoola Kashayam, Chyawanprash, Vyosadi Vatakam, and so on.

As per Ayurveda, a Vata and Kapha calming diet are suitable for the person suffering from sinusitis. Patients should avoid oily, fried, and spicy foods. They should also avoid cold drinks and ice-creams.

The foods that are easy to digest are recommended to the person suffering from sinusitis. The food items like khichdi, Dalia, and simple rice & pulse are good. As we all know Ayurveda treatment always focuses on body purification. Fresh fruits and vegetables should be included in the meal to boost the immunity system.

Now you get the information or knowledge about sinusitis. So if you and anyone of your known are facing a sinus problem then kindly consult the best ayurvedic doctor in india soon. Timely treatment is required to treat any disease especially if something is related to severe pain that destroying your daily life. Sinus treatment in Ayurveda is 100% safe and it has positive & long-lasting results. So if you are allergic to the medicines then ayurvedic treatment is best for you.

How to Choose The Right Digital Experience Platform?