History of lip cosmetics; from ancient to modern civilization and their packaging 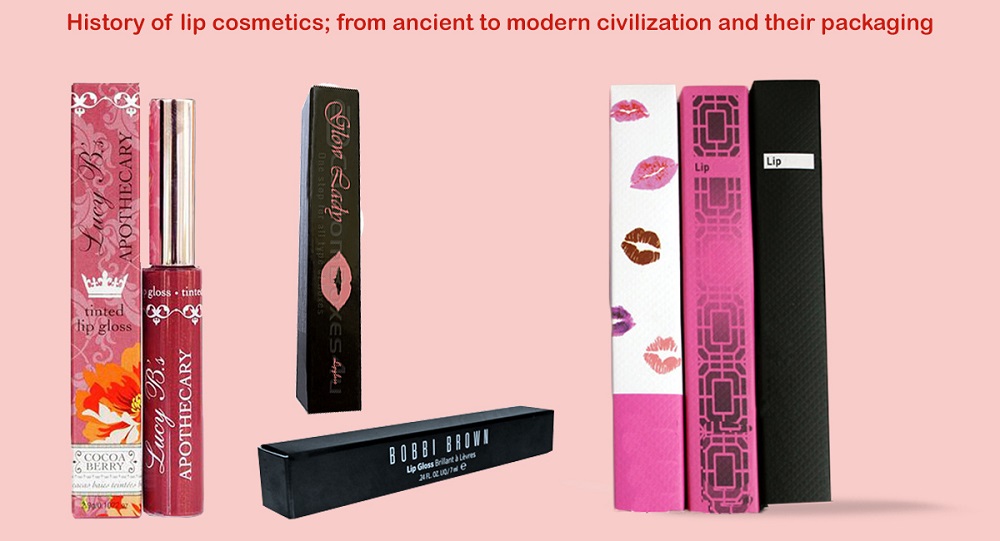 People used a mixture of lead and red bricks/soil to color their lips.

In 1922, Sir Leonard Woolley’s excavation of Ur’s ‘Royal Cemetery’ discovered that people of higher status in Ur civilization were buried with their lip colors. They used Cockleshells for storing their lip colors. These strong-ribbed shells were used as packaging for cosmetic products.

In Ancient Egypt as well, coloring one’s lips was more about social status rather than gender. People of higher class and social status wore lipstick and painted their eyes to denote their superiority.

Egyptians used red ochre, mixed with gum or resins to make a paste for coloring their lips. Use of carmine as red pigment in lipsticks also came from Egypt (50 B.C)

In this era, Brass and wooden makeup kits were used for storing lipsticks/lip colors. People of high social status took at least two pots of lipstick to their tomb (to signify their status even in the afterlife).

With rise and spread of Greek culture, there came a shift in cultural significance of lipstick. Coloring one’s lips was associated with femininity and lower social status. Women of higher class didn’t wear any makeup except for fake hair and dark hair dyes. In ancient Greece only harlots used lipstick.

First law ever made regarding lipsticks was that coutesans were supposed to wear their designated lip color at all times or else could be punished for posing as ladies.

It was somewhere between 700-300 B.C. that lipstick percolated through mainstream Greek culture. This transition was direct to higher class; working and lower class women continued to avoid makeup.

Greek tombs from this period contained Pyxides. These were cylindrical box with separate lid used to store lipstick.

Use of lipstick, once again, became popular, almost like a revival. People started coloring their lips for denoting social status. The feminine stigma attached with lipstick was removed and people from both genders wore lipstick.

The crazy wife of crazy emperor ‘Nero” started the concept of “Cosmatae”. There were special slaves, skilled in use of cosmetics and people of higher social status kept them for personal service.

(and yes, word cosmetics is derived from this word Cosmatae)

People had specialized containers made of metals and stones for storing their lip colors.

This era is known as the “Dark ages”. People were intolerant and churches didn’t favor use of lipstick. This era preferred a more plainer, simpler look for women. Lipstick, though was still being used by women and there was no stigma of any specific social class. By Middle Ages the criticism of use of lipstick gain more widespread hold.

Only pink and lighter shades were permissible to wear as they denoted purity. Women used lip colors made up of rouge of sheep fat and mashed up red roots (which resulted in a rose lip color)

Brass and metal containers were used to store lip colors and it was applied using a cloth or fingers.

This period again came as revival of lip cosmetics as both men and women wore lip rouges. King Edward IV wore a lip rouge called “bare flesh” and all the people in his court wore some kind of lip color as well.

Lipstick was finally embraced by England on coronation of Queen Elizabeth 1 as queen herself was an avid user of lipstick.

She even made her own crimson colored lip rouge with a combination of cochineal, gum Arabic, egg whites, and fig milk. People from upper class used lip rouges. Ladies in the court imitated the Queen and wore bright red lip color.

In 1865 B.Altman was the first makeup store who started selling lip colors in a mainstream retail setting. But the store chain went bankrupt and was closed in 1990 as the 1900s kept on shifting between popularity and notoriety of lipstick.

It wasn’t until 1922 in United States that use of modern lipsticks and lip-glosses as we know them today became widely popular. Still bold lip colors i.e. red were associated with prostitutes and women of lower social status. Women of higher statuses wore more rosy and pink shades of lip color.

The actual symbolic and economic standing of the lipstick began in twentieth century. This is when modern packaging for lipsticks started as well. Fidgeting with lipstick formulas in order to improve comfort, this era came with many advanced innovative lip cosmetics such as tinted lip balms, lip-glosses, and liquid lip colors.

Lipstick industry re-imagined lipstick as a symbol of conventional femininity. According a survey in 1990s Hundred percent of college girls wore lipstick while ninety-six percent brushed their teeth. With time instead of buying just one lip shade, women started buying multiple lip colors to wear with different outfits.

Modern packaging for lip cosmetics emphasizes on customization, personalization and marketing. Packaging has become so much more than just storing the product.

Tubes, Glass/plastic containers with applicator, and Plastic squeezable tubes are some of the popular styles of liquid lip colors and lip-glosses.

Labelling and marketing is probably the most important aspect of Custom Lip Gloss Packaging Boxes.