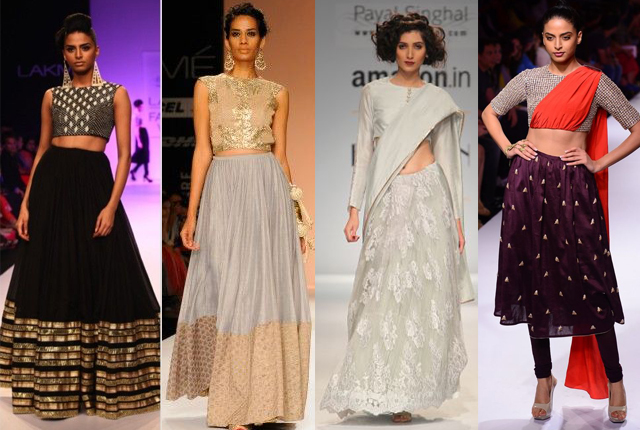 Indian history of fashion is almost as old as human civilization. The oldest Indian civilization, the Indus valley civilization is believed to have grown cotton, and people of the era are believed to have worn cotton made clothes. Women used to wear cotton sarees while men used to drape cotton Dhotis around their waist. Some men from the era also wore Turban around their heads. Besides cotton, people belonging to the royal class also wear clothes made out of imported silk.

Women from Indus valley also used to adorn their bodies with necklaces, bangles, bracelets, rings, and anklets made out of stones like turquoise, quartz, and jewelry made out of beads. Later they also started wearing jewelry made from gold, silver, and bronze.

With time the fashion also evolved and now women and men in the Vedic period were wearing altogether a different kind of clothes. Vedic era women were wrapping themselves with a single cloth over their shoulders, very similar to outfits worn by greek and Iranian women. Some women also wore a lower pleated garment called Pardhana wrapped and pleated around their waist and knotted in front. Pardhana was worn with a separate piece of fabric made into a Shawl or veil and a tight skirt was worn underneath this garment. During winters warm clothing called Pravana was worn underneath. Though varied in sizes and styles of wearing, both men and women use to wear these garments.

Some major revolutions came in ancient Indian fashion history by the time of the Gupta period. Stichting was introduced and clothes could now be cut and sworn into stunning pieces of garments. Women of this era were mostly wearing Sarees. Saree was a long piece of clothing that women use to drape around their bodies. The clothing is still worn by women in different parts of India. With time, Choli was also introduced which was a tight-fitting blouse that covered the upper part of a woman’s body.

The men of the era adhered to different dress codes. The noblemen and the courtiers of the era wore the long-sleeved brocaded tunic. The kings of the era used to flaunt Antiriya. The garment was draped around their hips and between their legs and then flowed down to the ankles.

The head jewelry garnered special attention in this era, the kings used to maintain long hairs and donned luxuriously decorated headgears. The women decorated their long hairs with heavily jeweled headbands, chaplets of flowers, pearls, ringlets. This was also the era when weaving and embroidery became popular among the masses. The women from the royalty of this era flaunted gold and pearl embroidered Sarees made from imported Muslin cloth.

The Indian fashion history witnessed a whole new flavor with the arrival of Mughals. Mughals brought with them a distinct and elegant style of dressing and infused it in the Indian thread of fashion. A further evolution came when emperor Akbar inspired the country with his unique sense of dressing and styling. His clothing had distinguishing elements from both Hindu and Muslim culture and arts. He wore long Kurta with a jacket adorned with lavish Shervani designs, with gemstone studded Turban on his head. To highlight his royal stature and grandeur, he flaunted fine jewelry as heavy rings, pearl strings, with an emerald embellished belt.

His wife Jodha walked along the emperor’s pace to match with his exquisite sense of fashion. She flaunted heavily embroidered Lehenga Choli with similarly lavish jewelry to complete her royal looks.

Source – Nimi Notes
Indian fashion has walked gracefully along the corridors of time and has evolved itself into a fully flourishing industry. Attracting special attention and popularity for the intricate embroidery designs on dresses, Sarees, Kurtas, skirts, shirts, and dresses. Also with globalization and the advent of the Internet, things in the country started getting westernized and the same happened to the Indian fashion industry. Indo-western dresses are ruling the trend for quite a while now. While the newer trends and clothing are raiding the Indian fashion market, the older ones are still enjoying a popular presence in the market. Lehengas, Kurtis, Sarees, Shararas, palazzos, and Shervani jackets are still popular choices of clothing across the country.